The 5 most Awesome moments of the US PGA Championships 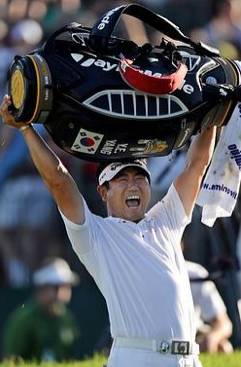 Well it is time for the last major of the year and we’ve trawled through the history books to bring you our top five picks for the most amazing, most interesting and downright most awesome US PGA Championships moments.

So in chronological order, here goes:

At Moraine Country Club in Dayton, Ohio, way back when the PGA was still a match play competition, Byron Nelson was going for his eighth consecutive tournament win. Despite trailing Sam Bryd late in 36 hole final, he came back to win 4 & 3. He extended this winning streak to 11 wins in a row, racking up a total of 18 tournament wins in one year – still the best season ever recorded. On top of this Byron clearly knew how to have a good time; nothing says good times like coke, hot dogs and Plus 4 trews. Amazingly Greg Norman led all four of golf’s majors after 54 holes in 1986. At the PGA at the Inverness Club in Toledo, Ohio, his lead going into the final round was 4 shots, but he was pipped at the post by Bob Tway, who holed a bunkershot on the last to seal his victory. What could so nearly have been the season of the Shark Slam resulted in only one major win at The Open Championship.  Ah well Greg, at least you’ve got 331 weeks as world number one, two majors and booming entrepreneurial empire to console you. The Wild Thing John Daly drove through the night to take his place in the 1991 PGA championship at Crooked Stick Golf Club in Carmel, Indiana. And four days later he took his place in the history books too. Starting the week as the 9th reserve and without playing a single practice hole, it remains one of great tales of the success of the underdog. Back then he wasn’t sporting the fantastically loud trousers that he is now famous for, but the mullet, tashe and fags certainly hinted that this guy knows how to party. Tiger arrived at Valhalla Golf Club in Louisville, Kentucky as the US Open and Open Champion and he was paired with golfing legend Jack Nicklaus for the first 36 holes, who was playing in his final PGA. Come the end of the week it was a true David and Goliath situation (although in this case Goliath won); Tiger, playing the best golf of his career found himself in a playoff with the slightly less well known, Bob May. On the first of three extra holes Tiger holed a long birdie put and danced his way down the green behind it. He held on to win the PGA and then completed the Tiger Slam at Augusta in the Spring. And he did it all while wearing trousers that looked like he’s borrowed them from MC Hammer. In 2009 at Hazeltine National Golf Club in Chaska, Minnesota, Y.E. Yang became the first Korean major champion. He also became the first man to come from behind in the final round of a major to beat Tiger, who up until then had won 14 out of 14 of the majors he’d led after 54 holes. All of this is impressive but the thing that cements Yang in our top 5 Awesome moments is his brilliant overhead press celebration. He couldn’t wait to get hold of the famous Wanamaker Trophy and so he held aloft the first thing he could get his hands on, which just happened to be his bag. Shame it wasn’t his caddy. Here’s hoping that we need to re-jig our top 5 after this weekends heroics.