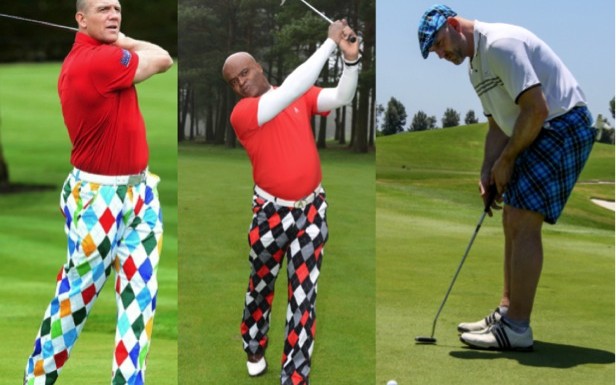 We love receiving photos of people wearing our bright golf trousers & it’s alway exciting to spot a famous face in a pair of Awesomes! Here are a couple of our favourite Awesome celebrity spots… Kriss Akabusi celebrating in his Well Plaid Trews in front of the European 2016 Ryder Cup Captain, Darren Clarke. We have no idea whether he made the putt… but he looks to be having an Awesome time anyway! The ex-England & British and Irish Lions rugby star is an absolute mountain of a man. He also has a cracking choice in golf shorts! He opted for a pair of Blue Plaid Trews Golf Shorts for his Dallaglio Foundation Golf Day & it looks like they helped him drain more putts… He assured us that this putt was holed:

He’s a lot bigger than us so we sure as heck aren’t going to disagree with him! Check out this Awesome photo of Sir Steve Redgrave donning a pair of our Trew Brit Golf Trousers. It is an extremely appropriate choice of funky golf trouser considering he won 5 Olympic gold medals for Team GB – a ‘trewly’ Awesome fit!
Kevin Pietersen Kevin Pietersen is never one to shy away from letting people know what’s on his mind, so when we spotted him in a pair of our equally loud Old Toms Trews we thought it was a match made in heaven. Maybe Piers Morgan would have a smile on his face if he had some crazy golf trousers on too… then again, probably not! Rugby legend Mike Tindall rocked a pair of our King of Diamonds to a charity golf day at The Grove. So thanks Mike for putting the Royal into Royal & Awesome.

Have you seen any other famous faces in a pair of bright golf trousers? Let us know in the comments below.