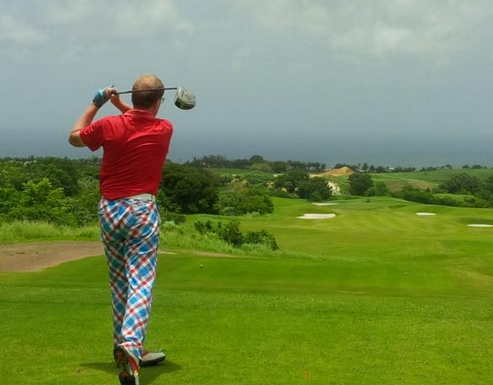 I have always been slightly crazy when it comes to challenges or raising money for charity. For instance having never been any kind of long distance runner, I volunteered to run the London Marathon in 1990 to help raise money for the charity. I felt the money raising would be easy even if I finished last in the marathon. My time wasn’t great but I got the bug and ended up doing 7 marathons of which 3 were in 6 months!

So when Sparks (the charity that aids medical research for children) started their longest day challenge I leapt to undertake 4 rounds in a day. It is supported by Royal & Awesome and who could turn down the chance to play some fun, bright golf for a whole day?   And how hard could 4 rounds be? I took it a stage further last year and embarked on 4 rounds in the 4 home countries in a day. I succeeded and managed to wear a different pair of funky golf trousers from Royal & Awesome for each round.

So fired up with knowing I could do 4 rounds I started looking for a challenge for this year. I more than found it when I started searching the Guinness Book of World Records and found the record for most golf holes in 12 hours on foot.

I had to carry my own clubs, the course had to be at least 6,000 yards and had to finish each hole. The World record stood at 221 holes and was played on a 9 hole course and played only with a 7 iron.

I started planning and organising in March of 2015 and the more I planned the more sensible it seemed to only use a 7 iron. I played round after round to get miles in my legs and trained and trained to build stamina. The round was planned for Monday 28th September at Fulwell Golf Club near Twickenham. I needed 12 hours of daylight and didn’t want it too hot – that would be crazy golf if the sun were beating down!

The Sunday was not the best preparation as I was ill in bed all day with a fever, I didn’t eat and needed to get the fever out of my system. Not the carbohydrate loading day I had planned!

Come the morning of 28th I set off at 5am to Fulwell and arrived in time to change and prepare myself for a 6.40am start. The 28th offered just 11 hours and 50 minutes daylight. The course were superb in how they had prepared the clubs golfers to know the challenge I was embarking on.

Dressed in my finest Royal & Awesome colourful golf trousers and with my seven iron in hand I ran to the first tee. The ground staff had set up the course to be just over 6,000 yards for me but there was still the distance between green and tee to cover, some of which were quite large.

The next 12 hours hardly flew by but jogging and pacing across the yards I managed to cover 80,000 steps and over 40 miles in the 12 hours. Unfortunately I only managed 169 holes but that is a hole in less than five minutes for 12 hours. Not a bad effort for a 53 year old. I managed some funky golf, some poor golf and a some great golf.

Over £5,000 was raised for Sparks and I was very sore and stiff the next day. I have put the challenge out on the internet and so far I think I have the British Record even if I fell short of the World record. Will I be doing any more challenges? Well that would just be plain crazy golf – and even I am not that daft!