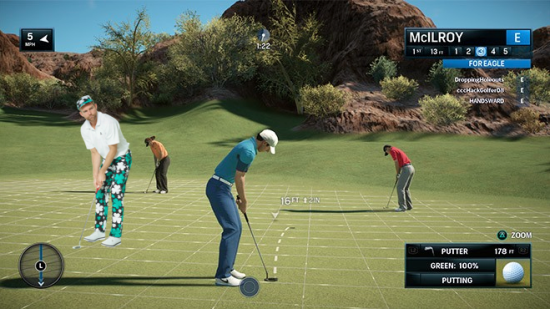 When we are out on the golf course we genuinely believe that we can hit similar shots to Rory McIlroy, but in reality we normally end up shanking that delicate flop shot into the nearest water hazard. So getting our hands on a copy of the newest EA Sports PGA Tour gave us a chance to actually play as Rory McIlroy & see how good he actually can be! It also proved how bad we can also be in real life.

Before we properly get started with our review, we want to be honest with you and let you know that we aren’t expert video gamers, we are golfers, so we might not understand or fully appreciate all the gameplay differences from previous versions. But we like to think this review might be useful if you are thinking about getting this game from a more casual gaming level.

Opening the game: What… There’s no Tiger Woods on the cover?! We have played a couple of PGA Tour video games over the years and this is the first edition without Tiger on the cover. It also feels a bit weird calling it “Rory McIlroy PGA Tour” but we won’t give fewer points for that because we aren’t that harsh.

It’s also probably worth mentioning that we played the game on Xbox 1. Simply because we have an Xbox 1 & don’t have a Playstation 4. But there are apparently a few differences between consoles so thought we should let you know.

Putting the game into the console: This was easy.

Playing the game: The developers have claimed that this is the fastest loading PGA Tour game of all time… we can’t disagree. The loading times weren’t too bad & we got into the flow of things pretty quickly. Instead of creating a new golf character we decided to hit the links with Rory as soon as possible. There are 8 real-life courses to choose from including TPC Sawgrass, Royal Troon, Bay Hill & Chambers Bay. As Rory had recently pulled out of the Open Championship 2015, we thought it would only be fair to give him a run out at St. Andrews, so clicked a couple of buttons and off we went.

Considering we were standing on the first tee at the ‘Home of Golf’ we weren’t particularly nervous, mainly because we were sitting down in our lounge, but in all honesty the course & surroundings did look very life like. We had chosen to use the ‘Arcade’ game system which involves flicking the left stick back and forward as we have played previous versions with this method and assumed we would be really good with it… we were wrong. We managed to hit our drive down the middle but then miss-clubbed our approach and ended up taking a 7 on the first. Our putting was also terrible but we think it’s something you could get much better at with a bit of practice.

As the round progressed we got more used to the ‘swinging’ and putting & managed to put together a solid 10-over par! We admit this is a pretty terrible score but it did start raining on the back 9.

Overall: + We aren’t massive gamers but overall the golf courses looked really good & life like (apart from one on a Battleship?!)

+ We also liked that the game wasn’t too complicated & you could “pick up & play” with your mates even if they haven’t played before so it’s good for a Friday night in with a couple of beers.

– There is no Augusta! One of the most famous golf courses in the world is no longer part of the game.

We score this game 4 pairs of Awesomes out of 5!

Let us know what you thought of this game in the comments below.